Robotic joint replacement surgery is one of the most exciting recent developments in orthopaedic surgery and it is something that Justin is very involved with. It allows the surgeon to plan out the surgery in ways that were not possible before. The joint replacement prostheses can be positioned very precisely and in a way that is customised to each individual patient. It is hoped that this will lead to better patient satisfaction and a longer lasting joint.

Robotic joint replacement surgery has been performed in parts of the world for 10 years and became available in Australia in 2017. Justin started using it soon after it was released in Australia.

There are now several robotic systems available and Justin has trained in the two most widely used ones – the MAKO and Navio systems. He now does all of his hip and knee replacement surgery robotically.

What is robotic joint surgery?

The robot system is made up of two components :

The computer uses CT scans or information from the operation to create an exact 3D representation of your hip or knee on the screen. The software then places models of the joint replacement prostheses over the joints and calculates several measurements to predict what the joint will look like after surgery. The planned positions of the prostheses can be adjusted by increments of 0.5mm or 0.5 degrees at a time to very precisely optimise them.

When the plan has been finalised, it is used to control the robotic cutting tool which cuts and reshapes the bones so that the prostheses can be implanted in the correct positions. The cutting tool can either be a saw or reamer attached to a robotic arm, or a high speed bur on a hand held device that is controlled by the computer but guided by the surgeon.

Once the bones have been prepared, the prostheses are then implanted, completing the operation.

What are the advantages of robotic surgery?

Robotic surgery is still relatively new, so there is limited long term research into its outcomes. However, there is growing research derived evidence that, on average, robotic joint replacement surgery is better than non-robotic surgery in terms of :

The robotic surgery systems are under constant development and this should lead to ongoing improvement in outcomes. 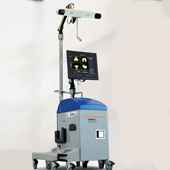 Using the robot for knee replacement surgery allows the surgeon to position the implants in a way that is customised to your inidividual knee. This ensures that the soft tissue around the knee is not too tight or too loose, which in turn provides you with the most stable and comfortable knee possible. 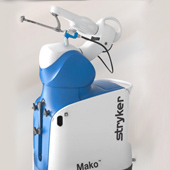 During a robotic total hip replacement, the surgeon plans out exactly where to place the implants even before the operation begins. He can make sure that the lengths of your legs and width of your hips matches the other side. He can determine the best positions of the components to maximise the stability of the joint, to prevent it from dislocating.